Did You Know? Naval Ordinance Plant and Air Base

Pocatello made a significant contribution to the United States and Allied victory in World War Two. The Naval Ordinance Plant (NOP) and the Pocatello Air Base were established shortly after the bombing of Pearl Harbor on December 7, 1941 which caused the United States entry into the war.

The location was ideal for a number of reasons—it was safe from air attack, it was inland far from the coast, it was a major railroad junction, a section of the transcontinental highway ran through the town, and off to the northwest was plenty of open space. The site was perfect to refurbish big naval guns and for training pilots and aircrews of United States Army Air Force (USAAF).

Repeated firing wears out the bore of any artillery piece and severely degrades the gun’s accuracy. The repair of these weapons required a facility with massive tools and equipment to handle the huge naval cannon. Before being sent back to their ships on the coast, the big guns were transported to a test range 20 miles from Arco that was later to become the INL.

The Pocatello Air Base was assigned as the Second Air Force 382nd. It was the training center for B-17 and B-24 heavy bombers and was known to have the longest runways in Idaho at the time. It is estimated that over 40,000 men and boys, among them, many members of the 464th trained in Pocatello. 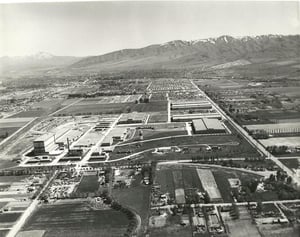