Did You Know? ISU Arch

The ISU Arch was the entry to the first building on the ISU campus, known as the Academy of Idaho in 1902. The original building was expanded by a wing on the west end in 1905 and another on the east end in 1910.

During early decades of the 20th century, the campus front was on Carter Street and the entrance of the Academy faced 7th Avenue, where it meets Carter on the north side of the current lower campus. 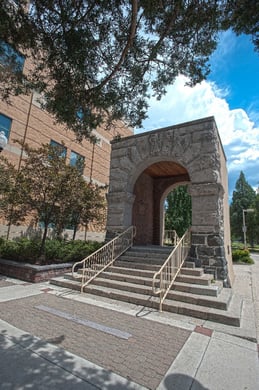 In 1915, the Academy was renamed The Idaho Technical Institute and the building became the Administration building for the growing school. It remained that until it was replaced by Frazier Auditorium as the administrative offices in the 1920s.

In 1928, the “Tech” as it was called, became the University of Idaho, Southern Branch and the building was renamed Swanson Hall. In later years, the gables were removed, the top floor was squared off, and the spire was removed from the tower. Swanson Hall was demolished in the 1970s, but the Arch was preserved.

It now is the main feature if the ISU History Walk where it is part of the tradition of entering and departing from ISU.