Safe Use of Fire Extinguishers 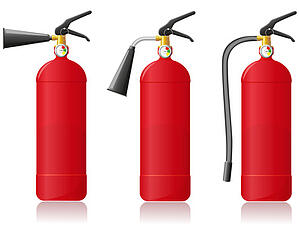 Due to the large number of fires in the United States, both residential and industrial, fire extinguishers should be available in any building in case of a fire. There are many types of fire extinguishers, each meant for specific fires. Using the wrong extinguisher has caused fires to get bigger, explosions to happen, and other things as well. Knowing which extinguisher to use for different situations can prevent a disaster from becoming a catastrophe.

Each extinguisher, A, B, C, D, and K, is meant for a different type of fire, and each one has a different geometric symbol with its letter on the inside.

Type B, a red square with a B, uses foam to put out the fire. It should never be used on electric fires, because the foam conducts electricity. It is meant for flammable and combustible liquids:

Type C, a blue circle with a C, uses CO2 to put out the fire. It should not be used for regular fires, because the CO2 doesn’t penetrate or cool the fire and it is extremely wind-sensitive. It is meant for fires that involve electrical equipment:

Type D, a yellow star with a D, uses a dry chemical to put out fires. It is short-range and is specific to the burning material, so should only be used for fires that involve combustible metals:

Type K, a black hexagon with a K, sprays chemicals that react with grease to form a non-combustible soap. It is meant for fires that involve cooking oils or fats.

Using the correct fire extinguisher for a fire has saved lives, both by extinguishing the fire and by not spreading the fire or causing explosions. Knowing which extinguisher is safe to use on each type of fire is important to keep everyone safe.