Which do you answer more each day, your telephone or your emails? For most people, the answer is probably email. Email has become an important business tools, almost replacing faxing and making snail mail practically irrelevant.

A 2010 study by the Radicati Group estimated that there would be 4.1 billion email users by the end of 2015 with the average corporate user sending an estimated 37 missives (an old school term for a hand-written communication) daily while receiving 78 emails (65

legitimate, 13 SPAM). If it takes an average of 5 minutes to compose an email (two minutes to think about it, two minutes to type it if you are fast, one minute to proof it) and another five minutes to read an email (2 minutes scanning the inbox for new messages, 2 minutes to read it, assuming it is not a long winded diatribe, and one minute to decide what to do with it—trash, store or respond), that equates to three hours spent sending and 5.4 hours spent reading emails each day. A 2009 study by web-monitoring firm, Pingdom, estimated that in 2009, 90 trillion emails (roughly 247 billion a day) made their way through cyberspace. How does any work get done?

Obviously, email is changing the way we communicate. People are more willing to say things in an email they would not say in traditional face-to-face communication and corporations have to deal with the fallout. In 2007, Eric Govan, the public relations manager for the Golden State Warriors basketball team, inadvertently sent an email joke to sportswriters around the country. He was terminated shortly after the team president sent out an email to the sportswriters apologizing for unprofessional content of the email. Katrina worked for a company that had a supervisor who was disliked by a large number of people in the organization. Shortly after hearing about the firing of the reviled supervisor, she received an email with the headline, “Exciting News!” After reading the email announcing a new project, she quickly typed out a response meant for a few close friends. The response went something like, “I thought the exciting news was about the supervisor’s firing!” She hit the send button. Seconds later, her ‘new email’ chime went off and her heart dropped through the floor when she realized that she had hit the reply all button and sent her snide comments to all 300 people in the organization. The next morning her boss met her at the door with a cardboard box filled with the contents of her office.

A recent Top 10 list of email blunders lists the Flame Email as a major offense in the corporate world. Flame Emails are those sent as criticism or as “corrective actions” to behaviors that the sender feels inappropriate. Because of the relative safety of hiding behind the keyboard, senders let loose with a stream of consciousness and hit send without re-reading or thinking about the ramifications of what was said. In face-to-face communication, non-verbal cues account for 90% of the communication process and with email removing 90% of the communication process, there remains a lot of room for misinterpretation. Even with the best of intentions, emails can be misconstrued as mean and spiteful because of the perceived tone. A program manager in company received an email recently that was intended to be a helpful critique of some work that the division had done. Because the tone of the email came across harshly, the program manager and several members of the department spent all night reviewing the work trying to validate the criticism. In the end, they discovered some of the points valid and others invalid but the point of excess wasted time was not lost on the program manager. 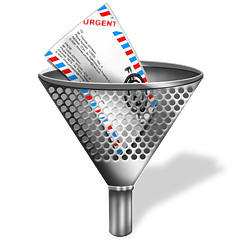 Email is a valuable tool that can be both a time saver and time waster. Gain productivity by setting up certain times of the day to read and respond to emails rather than doing it constantly throughout the day. If you subscribe to email lists, set them to send once a day or even once a week mode. Another nifty trick is to set up filters. Filters can efficiently sort your mail into critical and non-critical folders allowing you to focus on the important items first. Finally, think twice before you hit send. Make sure you re-read your message and if it is a critical message, consider delivering the information personally rather than digitally.

Email is a tool with bright and dark sides. It is not an appropriate medium to communicate sarcasm, anger or sadness and the cute little emoticons :) do not always do the job.