The No Jerk Rule

Following a trend in the NBA, the Los Angeles Lakers added two superstars to their lineup in hopes of winning a championship. Then, after an anemic 1-4 start, they fired their existing head coach and began looking for a replacement. Two months later, the Lakers are still struggling and appear to be getting worse as the season goes on.

“…for particularly poorly performing teams, coach replacements have little effect on team performance as measured against comparable teams that did not replace their coach. However, for teams with middling records—that is, teams where entry conditions for a new coach appear to be more favorable—replacing the head coach appears to result in worse performance...” So far the Lakers are demonstrating the validity of that study.

Recently a company I worked with began an employee search for a couple of entry-level positions. The group was determined to choose someone who would be a great fit, rather than someone with outstanding qualifications. Realizing their ideal candidate may be looking for something beyond an entry-level position, they adopted the mantra, “It is better to have a good person for a short time than a bad person for a long time.” Attempting to get the right people, they adopted a different strategy for the hiring process. When I last spoke with them, they were extremely pleased with their new additions and thought the revised process worked well.

A few months ago I read an interesting book by a Stanford professor called The No As***le Rule (for the sake of sensitive readers I will refer to the book as the Jerk Rule) that set my mind whirling. According to Amazon.com, the premise behind the book was that “employees with malicious intents or negative attitudes destroyed any sort of productive and pleasant working environment, and would hinder the entire operation's success.” While pondering the rules talked about in the book, I came across a podcast from the Freakonomics team which determined that having a good boss matters. If you have had terrible boss, you know the value of a good one, but what happens if you combine the lessons learned from the Jerk Rule and Podcast?

Stanford Economist Ed Lazear studied the effects of bosses on productivity and found the opposite of the sports world to be true for business. Dr. Lazear studied a company with 23,000 employees and over 2,000 bosses over the course of a year. In this company, it was common for workers to switch bosses multiple times during a year depending upon the team or project assigned. What he uncovered is that a good boss can actually increase productivity by as much as 10%. Consider the impact of a 10% increase in productivity in your business. What would that mean to your bottom line?

Phil Jackson, one of the greatest coaches in NBA history (love him or hate him; he has 11 championships), is not known for his tactical brilliance or his deep knowledge of the game, but rather his ability to bring divergent personalities together for a unified goal. Great leaders are not always those who know the most or are even the most talented. Great leaders are the ones who can bring people together and unite them. Great leaders hire great people; poor leaders hire people of lesser caliber. When leaders hire people who can inspire and challenge those around them, organizations grow. When leaders hire objects (people they can treat as an object) because they are afraid of being outshone, organizations suffer.

The typical interview process does not reveal jerks. To discover if someone will be an asset to your organization, you need to spend additional time. In the case of the company I worked with, they took extra time to bring their top candidates back for a second interview. The second interview took place in a less formal setting, allowing everyone involved to relax and look behind the proverbial curtain. Maintaining proper HR etiquette, the company was able to ask relevant follow-up questions that got the candidates talking. These answers revealed what the company was looking for and allowed them to make what appears to be the correct hiring decision. 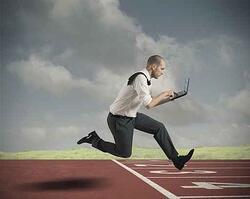 Jerks (whether leaders or employees) do nothing but stir the pot and hamper productivity. A highly qualified Jerk will do more harm to your organization than a less qualified people person. Jerks hire inferior talent and push them around. Quality leaders hire superior talent and let them run. As business owners and leaders, the choice is yours: Do you want to scratch with the chickens or fly with the eagles?