The Fear Motivator, Recognizing Fear in the Workplace

Some years ago I was living in a city with a population of around 3.5 million. Like all cities, this city had a neighborhood that one could characterize as dangerous. On an average day in an average week, I found myself putting gas in my van at a station on the outskirts of this neighborhood. Transaction complete, I got into my vehicle and was suddenly joined by a twenty–something male with a handgun. He told me to drive as the realization of what was happening dawned on me. I started the van and drove

in the direction I was told to; into the dangerous neighborhood. It was late afternoon and darkness had fallen as my impromptu passenger relieved me of my wallet and watch as he directed drive behind a boarded up strip mall and park. It wasn’t hard to imagine what was going to happen in that dark and deserted dirt lot. I was scared, terrified in fact, when I stomped on the brakes in the middle of the road and told this young guy that “whatever he was gonna do, he was gonna do it right there, in the middle of the road, right now.” It was then that he told me to get out and walk to the front of the van. Almost blind with fear at this point, I did as he said, fully expecting to be dead within seconds. Reaching the front of the van, headlights in my eyes, pulse raging in my ears, I found myself... alone. Bear with me here, I’m not just sharing this event in the hope of some sort of catharsis.

Fast forward to January of 2009, and like so many other poor slobs, I was laid off. The industry I was in is an unusual one, making it all the more difficult to take the skills I had gained 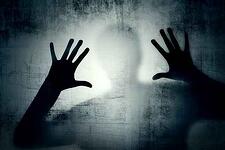 and honed and transfer them to another company. I had a choice to make: go find a job (any job) or go back to school. The first option held little if any promise and the second seemed impossible given my financial straits. Nevertheless, I chose school and embarked on a two-and-a- half year Associate Degree in Graphic Design. I had graduated some years before with my Bachelor in Fine Art, so school was no mystery, but I felt a debilitating sense of unease.

So why was I feeling this way. It felt like fear, denied me sleep like fear had and inhibited rational thought like fear. It must be fear. Lets be clear, what I was feeling was not at the same intensity as the event I described above. It was however, just as real. It was at this point that I decided that the little fear gnome inside my head, just chattering away in my ear, had to be dealt with. I tried reasoning, I tried positive self–talk. Nothing I tried had any meaningful effect. I had one choice left. Ignore the little bugger. Simple as that. He (all my fear gnomes are male) could say anything he wanted, talk as loud as he wanted. I knew from experience that I could not stop him from talking. What I could do was ignore him. I could still hear every word he said; I just wasn’t going to let anything he said have any effect on my actions. I just set fear aside and moved forward. I was amazed. It worked. I still felt the same way as I had when I started, I just wasn’t going to let that feeling influence what I did. I have put fear in its place. Sitting in the corner like some errant child with Turrets.

Now what, you ask, does all this have to do with

work and the work environment? Whether you are a worker with no subordinates or the personnel manager of a large corporation, have you ever considered that fear could be the reason an associate under-performs? Recognizing fear in the workplace, whether in  oneself or others, is often difficult as it is insidious and often buried. Fear encourages seemingly irrational behavior and thought. I am not suggesting that anyone deal with fear the way I did. I have no idea whether what I did will work for others or is even healthy. What I am suggesting is that it is a good idea to put fear on your radar if you are trying to figure what is motivating someone. What lies beneath this stealthy sense of fear may be a productive and enthusiastic person. It’s not just the manager’s responsibility; everyone needs to consider what motivates undesirable behavior. If you discover that it is fear ruling the day, your course is simple: talk, understand, support—help.

Well, it’s time to slide down the brontosaurus, at WORKFORCE TRAINING we do that. I have had my say and I hope you have found it worth your time. I leave you with this. “Save” often, listen with sincerity and fear only the fear–worthy.