A large company invited me to work with a department that is taking on a new project and needed help with skill development. The department had a history of solid performance due to talented people and a strong-willed leader with a clear vision. Department history suggested that this new project would be a success, however early setbacks caused concern about the department’s ability to be successful. After a few months, even though the project is not finished, there are signs indicating a turn-around. The project’s completion appears to be on the not-too-distant horizon.

Bob Starkey, in his blog post on failure, refers to John Maxwell’s book, The 15 Invaluable Laws of Growth. Maxwell states that, “Everything looks like a failure in the middle”. He supports that claim with a passage from a book by Price Pritchett, which states, “You can't bake a cake without getting the kitchen messy. Halfway through surgery it looks like there's been a murder in the operating room. If you send a rocket to the moon, about ninety percent of the time it's off course—it 'fails' its way to the moon by continually making mistakes and correcting them.”

Organizations that experience some type of failure and panic, making wholesale changes to mitigate damage and prevent its repeat, waste a lot of time and money. Replacing employees, especially from the outside, is a slow and difficult process. There is no certainty new people will mesh with the existing team or what baggage they may carry. A 2008 paper, Unpacking Prior

Experience: How Career History Affects Job Performance examines the impact of bringing in outside people and how their previous experiences affect performance.

The paper reveals some interesting things, primarily that the theory that prior experience improves performance is flawed. Previous experience does reduce the learning curve for core tasks, but it does not always predict new a hire’s adaptability and the impact on productivity. The report concludes with the statement, “If your competitive advantage is the culture of your company, you want to be careful about bringing in people with a long tenure in their occupation or industry and think about how that prior experience is going to bring positives as well as negatives to the firm."

Another study by the Wharton School indicates that people hired from outside the company receive significantly lower performance evaluations during their first two years compared with internal candidates promoted to similar positions. The study goes on to say that after the initial two years, external candidates get additional promotions more quickly than do the comparable internal candidates.

The two studies together indicate the importance of finding bright people, who meld well with the company’s culture for lower level positions, then mentoring and providing them with development opportunities. Another organization that I work with has used this model successfully on two different occasions. In both instances, the company needed lower level office help. 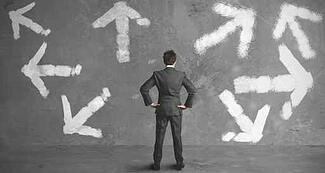 Rather than treat the positions as such, they employed a broader vision and looked for candidates who had basic skill sets and more important, were a good cultural fit. Within a relatively short time, responsibilities were increased and promotions given in both cases.

Failures are part of existence; it is not the failure that matters as much as what is done with the failure. As with the first company discussed, setbacks occurred and people outside the organization questioned the personnel assigned to the team and their commitment to the project. However, their wise leader and his staff managed to “clean up the kitchen” and make the necessary course adjustments to get the project on track with the existing staff. Sometimes a thorough house cleaning is necessary and people have to go, but consider the ramifications before such actions. Successful leaders keep their wits about them during setbacks and find ways to motivate and inspire the team rather than reacting rashly in the heat of the moment. Failures litter the path to success, but those who choose companions wisely, find the way much easier and the taste of success much sweeter.