I Have Good News and …

Wife: I have good news and bad news.

Husband: I m very busy. Just give me the good news.

Wife: The airbags in our new Porsche work perfectly.

I’ve noticed lately that the 30-somethings I come in contact with have begun using “P.S. or BTW (by the way) statements” as a quick segue into from innocuous subjects into uncomfortable, marginally related topics.

For example, after discussing how tacky paper plates are, one mentioned, “P.S. I accidently broke your favorite antique platter...”

Or, after talking about current politics, another added, “Oh, and BTW, you know the scandal involving the local congressman?  Your best friend is involved in a similar situation….”

P.S./BTW statements are usually given as if they are a throwaway afterthought, rather than the most important part of the conversation.  The theory seems to be that if the information is tossed out casually (often while walking away) there will be no difficult questions asked, no embarrassing follow-up discussions.

I find this both amusing and annoying, but I’ve begun to realize it is not a new manipulation.  It’s the current iteration of the old standard, “I have some good news and some bad news…”

I realize that I’ve been doing it for years—not employing a P.S. or BTW lead-in—but effectively using the same ploy when delivering bad news. 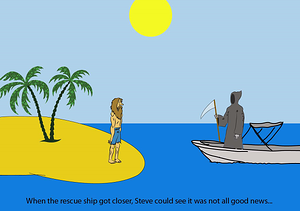 For example, the first time I had to lay off a worker, Julie, I led into it by telling her what a good job she’d been doing, how valuable she was to the company and how much I admired her work ethic.

While all of this was true, it made telling Julie she was terminated even more difficult 10 minutes later.

While I wanted to believe I was softening the blow of unemployment, I probably made the process even more painful.

There had been rumors of lay-offs for months, and I’m sure I didn’t project good news.  Julie probably already suspected the worst, but I made her suffer even longer.

On the flip side a former leader, Gail, once pre-empted a Good News/Bad News presentation.

She and I had a meeting with Jim, a representative from an insurance company whom we had agreed to use for an educational project.  Everything had been negotiated except the price. We had privately decided what we could afford to pay and agreed on a maximum amount.

When he arrived, Jim brought in two 4” binders of educational materials, which he began to painstakingly review page by page.

(It put me in mind of the Woody Allen movie, Take the Money and Run, in which hardened inmates were punished by being put in the “sweat box” with an insurance salesman.  I could envision Gail and me crawling out of the box days later with Jim walking beside us, binders in hand, and saying cheerfully, “As you can see, this is the best program of its kind.  And BTW, the price is only…”)

After about 5 minutes, Gail said, “Jim, this is all very impressive, but we’ve already reviewed the materials.  Let’s cut to the chase here.  How much are you going to charge us for this program?”

Jim named a price which was negotiated until agreeable to all concerned.  Afterwards he admitted he had initially planned on giving us a 45 minute presentation on the materials in order impress us with the value of the course and justify his asking price.

Start With The Bad

It may not be possible or appropriate to cut to the chase in all situations—whether you are on the giving or receiving end of bad news, but it certainly is a viable option.

It is good too, to review your own reactions to bad news.  If you can temper knee-jerk reactions, it makes it easier for others to deliver bad news.

A man I worked for, Joe, used to start every staff meeting by asking for the bad news of the past week—mistakes that had been made, problems that had arisen.

At first I thought this was a rather negative way to start a meeting.

I soon realized though, that in his new position Joe was trying to make sure people knew they could give bad news without fear of recrimination or embarrassment.

Better to hear it than hide it seemed to be his motto.

Gradually there was less and less need to talk about bad news at the start of the meeting because people had become used to reporting and solving problems as they occurred.

Think about P.S./BTW statements the next time you are faced with delivering a difficult message or can see where an uncomfortable conversation is headed.  If the news is truly devastating, honesty up front may actually lessen the pain for everyone involved.